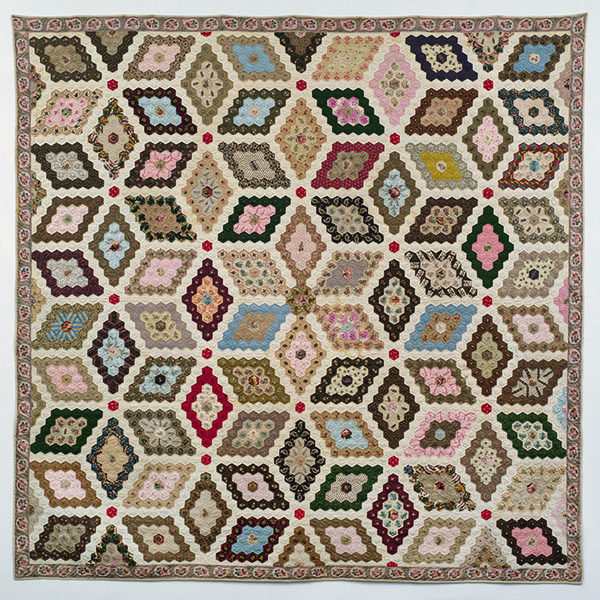 Stories in the Seams – The Hannah Wallis Quilt

The DAR Museum is a part of the National Society Daughters of the American Revolution’s headquarters in Washington, DC, just a few blocks from the White House. by Alden O’Brien

The DAR was founded in 1890 by a group of women who, excluded from membership in the newly formed Sons of the American Revolution, formed their own organisation with the mission of historic preservation, education and patriotism.

Membership is dependent on descent from a man or woman who can be proven to have supported the American Revolution in some way, whether in the military or some other means (including, for example, women who sewed uniforms, cooked or did laundry for the military, or nursed soldiers). Since its formation, the Daughters have collected objects which document early American life, including furniture, paintings, ceramics and metalware, clothing and textiles.

Learn how to hand piece

Its quilt collection includes more than 300 quilts and unquilted patchwork, appliqué, embroidered or wholecloth counterpanes, over half of which date to before 1850, and for over two-thirds of which the quiltmaker or family provenance is known. In the upcoming editions of Quilters Companion, further quilts from the DAR collection will be presented. As a museum, we enjoy sharing the history of our textiles. We have, and will continue, to welcome groups from Australia to explore our collection up close. Bookings are required for this service. 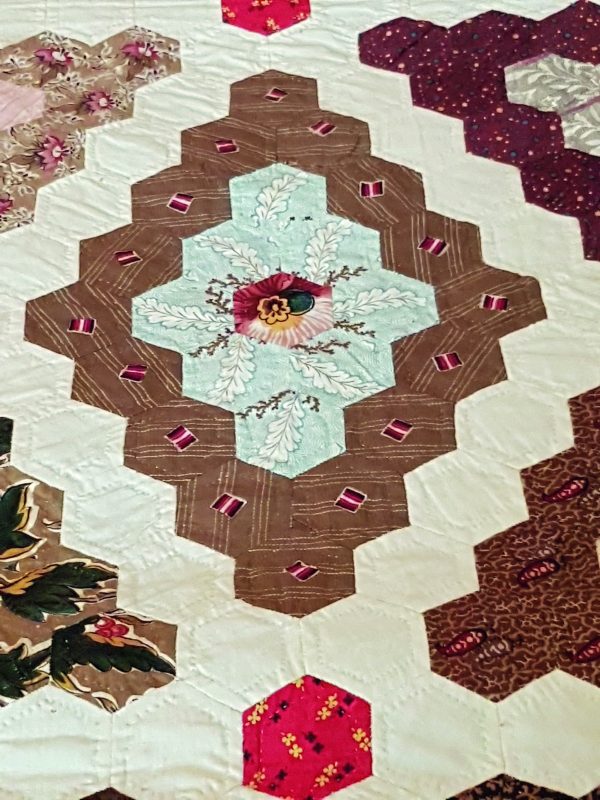 A veritable catalogue of more than 50 cotton prints of the 1830s and 1840s, the Hannah Wallis quilt is a magnificent example of the hexagon design. If you look closely, you may be able to find some of the “document prints” in the Hannah Wallis printed fabrics line produced a few years ago by Windham Fabrics. (Some of the prints in that line, however, came from other fabrics in the DAR collection.)

Godey’s Lady’s Book, one of the United States’ first women’s magazines, published an illustration and instructions for a hexagon quilt in 1835. While hexagon quilts were well established in Europe, and were most likely already known in the United States, this is the earliest known and possibly first published and named quilt design on this side of the Atlantic. Godey’s suggested that “perhaps there is no patchwork that is prettier or more ingenious than the hexagon … this is also called honey-comb patchwork.” The article went on to give instructions for the traditional English method of paper template piecing.

The arrangement of the hexagon pieces is now commonly known (at least in the United States) as Grandmother’s Flower Garden, and sometimes as Martha Washington’s Flower Garden, names which date to the early 20th century. During the colonial revival in the 1910s through to the 1930s, Martha Washington’s name was given to any number of products and designs to lend them a historic cachet. Quilt pattern names were not standardised until the 20th century, when communication and homogenisation was made possible through publications which began to publish patterns and often invented names for marketing purposes. Even then, there were regional and personal differences. At the time Hannah made her quilt, mosaic quilts with different arrangements do not appear to have had different names.

Hannah arranged her diamond shapes radiating out from a central six-petaled flower or pinwheel. Where rows of sashing meet, a single red hexagon punctuates the intersections. The colour palette is mostly tans, browns, pinks and dark reds, with some soft blues as well as some green accents. A few of the fabrics are small-scale checks, stripes or monochrome textured prints. Most, however, are corals and florals with a few geometric designs, and every one of these is cut to show the print to best advantage, a method we now call fussy cut. Flowers and leaves are centred; paisleys and coral branches radiate out from the centre of the diamonds; floral stripes are centred and aligned thoughtfully. Most of the diamonds balance lighter middle rows with dark prints on the outside, but often prints of similar intensity lie side by side.

Hannah was the daughter of Samuel Wallis, a man with a colourful history. Despite his Quaker background, he signed on with the Pennsylvania militia during the revolution. In the late 20th century, however, Wallis’s true nature was revealed. In the attic of a captain of the British army serving in the revolution, a forgotten trunk was opened after 200 years. Papers within revealed that Wallis had been in the pay of Benedict Arnold, the famous Tory spy.

Hannah was born in Philadelphia near the end of the revolution, two years after the British occupation (or recapture, depending on your viewpoint at the time) ended. Her family divided their time between the city and their land in north-central Pennsylvania, where Hannah lived after her marriage to William Miller. Marrying in her mid-30s, Hannah went on to have three children, who would have been in their teens or grown by the time the quilt was made (in fact, the quilt should more properly be called the Hannah Miller quilt). Local stores may well have carried a wide array of the latest printed cottons. Alternatively, Hannah may have shopped in Philadelphia.

Hannah Wallis Miller’s quilt passed through the family until it was donated to the DAR Museum, along with a silk needlework picture made by Hannah’s cousin and close friend, Elizabeth Hollingsworth. Family history relates that the two cousins attended school together in Philadelphia, where they both executed typical schoolgirl needlework and exchanged them as tokens of mutual affection. The needlework depicts two young girls strolling arm in arm in a landscape. The DAR Museum already owned a sampler made by Hannah’s mother, Lydia Hollingsworth, while at school in Philadelphia in 1759. Together, the Hollingsworth/Wallis textiles are testament to the longstanding tradition of genteel ladies’ training in fine needlework.

Tags: stories in the seams
0 shares