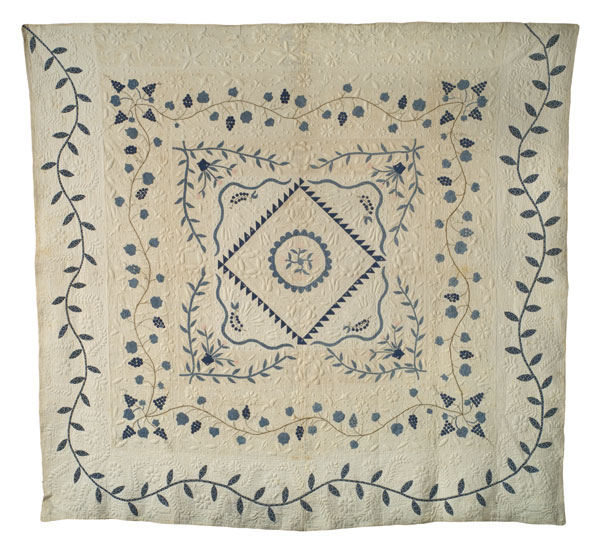 Stories in the Seams – Family Connections

By Alden O’Brien, Curator of Textiles, The Daughters of the American Revolution Museum

Three generations worked on these quilts over the course of half a century and 480km. Elizabeth Yoakum Harness helped her six-year-old daughter Martha compose the centre of the framed medallion in 1794 in Moorfield, Virginia (now part of West Virginia). Slight differences in the colour and quality of the background muslin in each successive border support the family history of the quilt being made over the course of Martha’s childhood.

The final border was added after the remainder of the quilt was finished. Its blue and white print is not found in any of the inner borders, and its backing is a separate piece from the rest of the quilt’s backing. Possibly a larger quilt was desired around the time of Martha’s marriage in 1817.

Blue and white resist and discharge printed cottons dominate the design, combining both dark indigo and medium-blue shades, with pink accents in the tulips. The grapes are given a little three-dimensionality by being formed of circles larger than the grape, folded under and stitched to the ground fabric. Embroidery thread creates tendrils around the grapevines. Stuffed work (the period term for what we now call trapunto) flowers, feather fronds and leaves fill much of the white spaces.

The quality of this work gets better from the centre outward, suggesting Martha’s improving skills as a seamstress. Echo and stipple quilting fill the remainder of the white areas.

Soon after their marriage, Martha and her husband Isaac Darst moved west and settled in central Ohio. Martha’s daughter Elizabeth Ann (named after Martha’s mother) made the pale blue sunburst quilt prior to her 1840 marriage to William Wallace Bierce. The fabrics were probably bought at Elizabeth’s father’s store.

Choosing the same blue and white palette as her mother’s quilt, Elizabeth restricted herself to just one pale blue print. Instead of framed medallion appliqué, she chose an on-trend pieced design in block arrangement. While the sunbursts are pieced with skill (albeit slightly irregularly), it is the high-relief stuffed work motifs which form the most striking aspect of the quilt. Cornucopias, grape clusters, stylised pomegranates and fruit baskets fill the interior spaces, while sunflowers and a stylised fan design form an outer border. Small scallop designs are inserted between the blue zig-zag edging. Stipple background quilting is well chosen for creating a high contrast with the highly stuffed pictorial motifs.

The quilts descended through different branches of Elizabeth Darst Bierce’s family. The cousins in charge of the quilts decided the DAR Museum would be the right place for the quilts so that they could be preserved together. Both of the quilts have been featured in exhibits since their acquisition in 2005 and 2006. Both quilts are also discussed at length in Roderick Kiracofe’s book The American Quilt: A History of Cloth and Comfort, 1750-1950.

Stitch a gorgeous blue and white quilt with this pattern by the Hunters Hill Quilters!

If you wish to see more of these quilts, they can be found at:

How do they do it? Judy’s Rainbow by Betty Busby