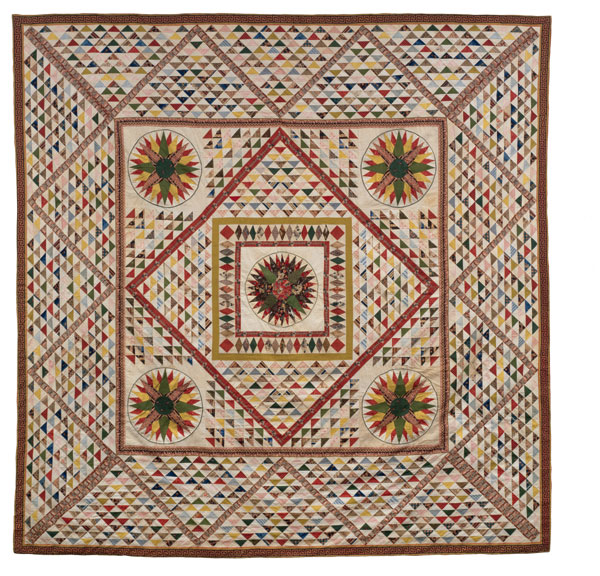 Stories in the Seams – Pieced Counterpane

By our best count, there are 4004 triangles in this design using at least 65 different cotton prints, and over 4500 pieces overall (you are welcome to check our math!). Mary Key contained this exuberance by arranging the pieces within larger triangles bordered by sashing and punctuated by mariner’s compasses, all within a traditional framed medallion layout. After the 18th century, when quilts were rare (and mostly wholecloth), American quilters began making pieced quilts using simple shapes — squares, triangles, diamonds, hexagons — building on the English patchwork tradition. As fabrics became more affordable with mechanised textile production, and American quilters became more innovative, more complex quilt designs proliferated, but the basic shapes still formed the basis for most of the designs.

Using the traditional layout of the framed medallion style (which had mostly gone out of fashion by the 1840s), Key took the pieced quilt to a complex and masterful level. The apparent random arrangement, if you look closely, is actually very carefully thought out. Prints and a few solids in pink, red, green, yellow, varying shades of blue, and tan-and-brown and blue-and-tan combinations (the latter particularly popular in the 1840s) follow a very disciplined and symmetrical pattern within each bordered triangle. In fact, Mrs. Key devised two slightly different multi-row sequences for her large triangles. Some rows simply alternate two colours (ABABA). Others have a more complex symmetrical arrangement (such as ABCACBA, or ABCCBA). Sometimes different prints of a certain colour appear within a row, but the colour arrangement is maintained.

The Greek Key pattern of the outer border is surely a play on her family name. Mary was the wife of Francis Scott Key, the author of the words to the “Star Spangled Banner”, a poem written during the attack on Fort McHenry by British royal navy ships in Baltimore harbour in 1814 and soon set to existing music. In 1931, it became the United States’ national anthem. Francis Scott Key made a career for himself as a prominent lawyer in Washington; Mary herself came from long lines of prominent colonial families and was born on a plantation in Maryland’s eastern shore of the Chesapeake Bay region.

The quilt dates to the 1840s. Mary Key was an older quiltmaker, turning 60 in 1844, which challenges the oft-held perception that most quilting was done before a girl’s marriage. Logically, if a woman enjoyed piecing and quilting, she would continue to make quilts throughout her lifetime. By the time this top was being made, Mary Key’s children were grown. In 1843 she was widowed.

The Keys had always divided their time between their Maryland and Washington properties, and it seems likely Mary continued to do so after Francis’s death, visiting her daughter in Baltimore, to which she finally relocated by 1850. She died in 1859, just days short of her 75th birthday. The quilt passed down to a great-granddaughter who gave it to a friend, who bequeathed it to the DAR Museum in 1942. Frequently displayed and published, Mary Key’s Counterpane continues to inspire, amaze and possibly challenge modern quilters.

Getting Cosy with Designers – Claire Turpin and Lenna Green

In the Studio with traditional quilter Maree St Clair