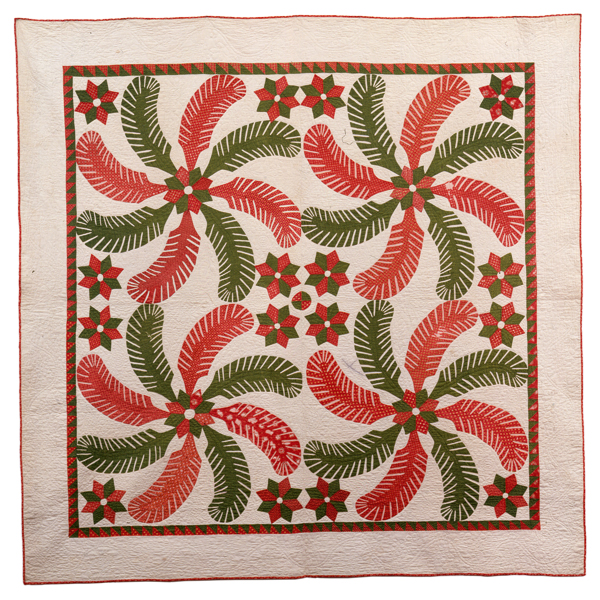 Stories in the Seams: Princess Feathers

Often used as a centre medallion or, as seen in this quilt, in groups of four large blocks, graceful plumes spiraling out of a centre circle describes a Princess Feather appliqué quilt. Beyond that basic premise though, the design variations spiral out into infinity.

This quilt was constructed entirely by hand and consists of four blocks without sashings. Each block has a star shape in each corner and the centre of the quilt is a small multi-coloured circle. It’s surrounded by a thin sawtooth border, then a wider white border.

Especially popular from about 1840 to 1900 but never really out of fashion, the patterns generally have six or eight ‘arms’ and are predominantly done in red and/or green fabrics. The edges of the plumes can be softly scalloped or sharply serrated. A single plume may be all red, all green, or half of one colour and half of the other. If the ‘half’ is divided vertically through the plume, it creates movement to the spiral by the juxtaposition of complementary colours. If the plume is split horizontally, it creates a stem topped with a ‘bloom’.

The centres can vary as well. Some are a simple circle, others have a configuration in the centre that looks floral. This quilt favours the choice of anchoring the centre with a star shape, which is also common. Eight segments in the star echo the eight feather stems. The star motif (pieced first and then appliquéd to the ground fabric) is repeated here in the corners of the individual large blocks, creating a secondary pattern that both accentuates and balances the spinning fronds. A small multicoloured circle, where all four blocks touch in the centre, acts as a linchpin for the overall design, with a vibrant Sawtooth pieced border enclosing all.

The term Princess Feather was once believed to be a corruption of Prince’s Feather, a reference to the three plumes from the insignia of Britain’s Prince of Wales. That begs the question, why would 19th-century Americans be making quilts commemorating a member of the English monarchy?

Actually, they weren’t. Princess Feather and Prince’s Feather are both names for types of the diverse amaranth plant. Native to the American continent, edible varieties were cultivated by indigenous people, utilising both the leaves and grain produced by some plants. Other names include descriptive terms like Lady Fingers, Wave of the Ocean and Ostrich Plume, in addition to the romantic Love Lies Bleeding and Kiss Me Over the Fence. The distinctly unromantic Pigs Weed hints at how prolifically the plant grows. And yes, Prince’s Feather does refer to the Prince of Wales, probably assigned to the plant before the War of Independence. Princess Feather became the predominant name through the publication of books and articles about quilts and quilt patterns in the early 20th century.

What is intriguing about the plant/quilt pattern relationship is that the diverse colouration seen in the quilts appears in the plants. Amaranth leaves are often variegated in colour. The Joseph’s Coat variety has tri-coloured leaves of red, green and yellow. Floral stems can be all red or all green, or a single plant may produce both. The small compact flowers may grow on tall spikes, drooping tassels or wafting fronds.

Create the Bouquet for Sir Joseph Quilt by Helen Rhodes

The appreciation for graceful botanical forms is also expressed in this quilt by small floral motifs quilted into the white background with a scalloped vine quilted into the outer border. The maker is unknown to us, but her admiration of the natural world remains evident in her fabric homage to her garden.

Virginia Vis is a volunteer curatorial assistant, working with Alden O’Brien, Curator of Textiles, at the Daughters of the American Revolution Museum in America. More information about this quilt and others in the DAR collection can be viewed on the Quilt Index: www.quiltindex.org