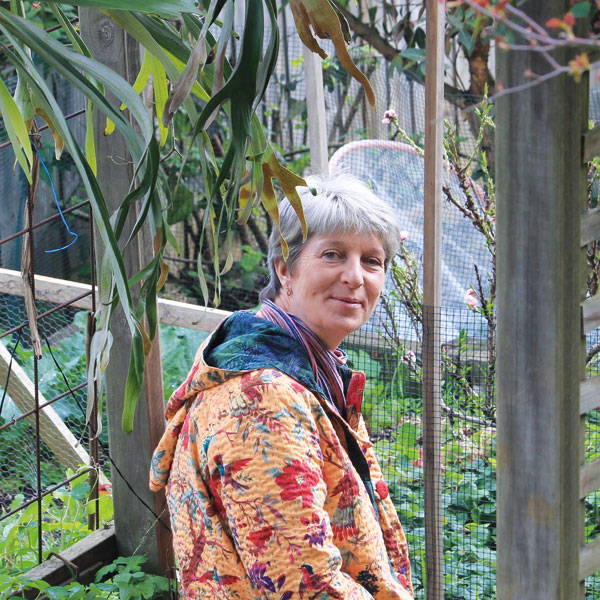 The art of appliqué first came to Veronique Diligent’s attention when she moved to Melbourne Australia more than 30 years ago. She has developed her skills of English paper piecing, needleturn appliqué and Broderie Perse to produce distinctive applique patterns that share the vibrant colours of the French countryside.

A fertile imagination coupled with an ability to “draw anything” are the basis of her creative endeavours, says Veronique Diligent, a Melbourne-based quiltmaker. Her eye-catching quilts arise from an ability to perceive fresh ways of seeing her surroundings, whether the familiar or the unusual. Veronique often adapts traditional designs, employing various techniques such as appliqué, embroidery, English paper piecing and Broderie Perse to structure, embellish, texture and otherwise create her quilts. She is an admired instructor, regularly teaching at her local quilt shop, Sewn and Quilted, and in overseas locations during 2019 such as the Quiltmania salon in Nantes, France, and the Red Thread Studio in Florida, USA.

Swiss-born, Veronique first visited Australia in her early travels and was captivated by a sense that she belonged here. Subsequently returning to Australia in 1990, she met and married a French man, making Melbourne their home. After the birth of their daughter, they relocated to France in 1998 for a time to be closer to family, but by 2005 the pull of Australia was too much and they returned to Melbourne together, now with a son as well.

Veronique observes that quiltmaking is not a traditional craft in Switzerland. Her mother was an accomplished seamstress, knitter and china painter, in which Veronique showed little interest, though she did learn to cross stitch at school. It was not until she first lived in Melbourne that she became aware of quiltmaking. A neighbour had introduced her to a sewing group where she was initially exposed to teddy-bear making and appliqué. She was smitten, and since that time has become immersed in the making of quilts.

Her very first quilt was for her new-born daughter, depicting teddy bears sleeping under blankets made from half-inch squares. She had intended to use only the country-styled fabrics she had on hand but eventually succumbed to the lure of some Aboriginal-inspired fabrics and incorporated them as well. As Veronique remarks, “I was already creating.”

During her relocation to France from 1998 to 2005, Veronique hoped to find a sewing group in the village in which she lived, much like the mutually supportive group she had found in Melbourne. However, she realised that the village women primarily craved tuition. As quiltmaking was not as well established or as popular in France as she had found in Australia, Veronique discovered that the village women were focused on traditional American quilts and country-style fabrics for inspiration. In the absence of a local tutor, she chose to rapidly engage in acquiring the necessary knowledge to teach and effectively led two groups of 12 women once a week in learning sewing techniques and their application in quiltmaking, design styles, fabric choices, colour mixing and the like. The enthusiastic encouragement she received from the women in her classes gave her the wherewithal and confidence to tackle new projects, including taking lessons in embroidery from a well-known French embroiderer, giving her additional knowledge to experiment with stitches.

Back in Australia, Veronique continued her involvement in quiltmaking, experimenting with various forms, working for a time in a patchwork shop, and designing and teaching. In 2009, she launched her own venture, Wattlebird Designs, named for an Australian honeyeater with a distinctively raucous cackle, commonly found in suburban gardens. Veronique chose to adopt the bird’s identifier as she realised that most Australians could neither remember her name nor pronounce it correctly. Fast-forward to 2019 and she has found that as she teaches more, her name is more readily recognised than Wattlebird Designs. Veronique has now initiated a new venture known as Veronique’s Quilt Designs.

Being open to new ideas and a willingness to experiment have been central to Veronique’s quiltmaking journey. A few years ago a friend introduced her to reproduction fabrics by offering her a pack and “it was love at first sight”. Though she admits to being slow to gain the confidence to use them, she has gathered a “quiet and gentle collection” that she loves to create with. More recently, however, she has been enticed into the world of bright and modern fabrics — “modern fabrics are so tempting”.

Veronique is also fascinated by antique quilts and the simplicity of boutis quilts (a French technique of wholecloth). She says “the patience (required) and the purity of the work is stunning and an inspiration”. When it comes to inspiration, Veronique believes that sources are everywhere to be found, be it in nature, the built environment, everyday products and packaging, and humans and their conditions among others.

That said, Veronique admits that when creating a quilt, she can also be quirky. For example, her first scribble “has to be on the back of a used piece of paper”, often no bigger than 10cm (4in) square. She will toss the paper into her “ideas box” in a dedicated sewing space and let it simmer for a few days, or longer, depending on what else she has on. When she is ready, she will refer to the ideas and begin drafting a design, using the enlargement and reduction function on a home copying machine to experiment with the relative size and position of the design elements, before selecting the fabrics. She loves fabric and often finds it difficult to work with a particular range and style, preferring to mix and match, and selecting complementary fabrics. As a quiltmaker and embroiderer, Veronique is very attracted to Australian flora and its stunning colours, often using it as guidance when looking for a specific combination of colours.

About eight years ago, she observed that there was an interest among quilters in depicting French icons, such as the Eiffel Tower. Just for fun, Veronique produced Bonjour de Paris, which was published in Homespun in 2012 (see page 43). In similar vein she followed this with Postcards from Venice, published in Homespun in 2014 (see page 44). Since that time her focus has shifted and the range of her expertise can be seen in The Bee Quilt (inspired by the bees in her Melbourne backyard) – see page 40, and clamshell quilts including one called Pêle-Méle Encore, of which the third variant is shortly for release as a pattern.

Veronique’s advice to quiltmakers, regardless of their level of skill, is “to take classes”. She acknowledges that she learned “so much with the much-missed (late) Di Ford-Hall” who taught her to “look at fabrics in different ways”. Not only does one learn from the tutor, but “you are inspired by the other students” as well, she says.