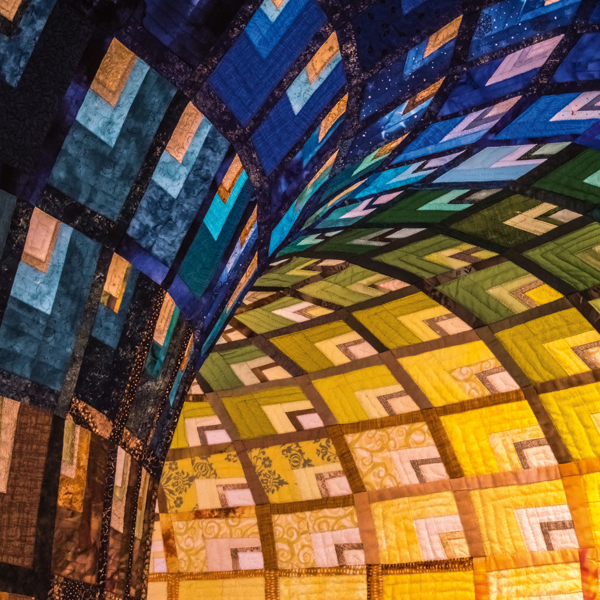 How did she do that? Azure de Colores

Art quiltmaker Montse Forcadell Blasco of Catalonia, Spain, explained that, “Apart from getting the light at the bottom of the tunnel, it also had to be reflected in the dark areas with the same colour as its origin.”

Spanish quilter Montse Forcadell Blasco has mostly expressed her quilting art with fluid lines and appliqué. However, after she made Fresa Con Chocolate (Honorary Mention at Festival of Quilts, Birmingham 2016) she realised that, while she had a good command of colour, shadows and details, once finished, the fabrics still looked flat.

“I wanted to go further,” Montse explains. “I wanted the outcome to be more organised in technique and I also wanted to play with the effect of ‘Trampantojo’, meaning that I wanted it to have a lot of textural effects in a flat work.” Inspired by the vortex of quantum physics discovered by Nobel Prize-winning physicist Max Planck, Montse searched online and found a vortex illustration. Into that vortex she drew the basic Log Cabin pattern.

“I could not draw the pattern and then define what the colours would be, and where they would be placed,” admits Montse. It wasn’t her intention to make such a large quilt, but the colours and the grading dictated the size. “The quilt demanded that all the colours of the chromatic circle were included and that they should all be derived from blue. Hence the title of the work Azure de Colores (Blue Colours).”