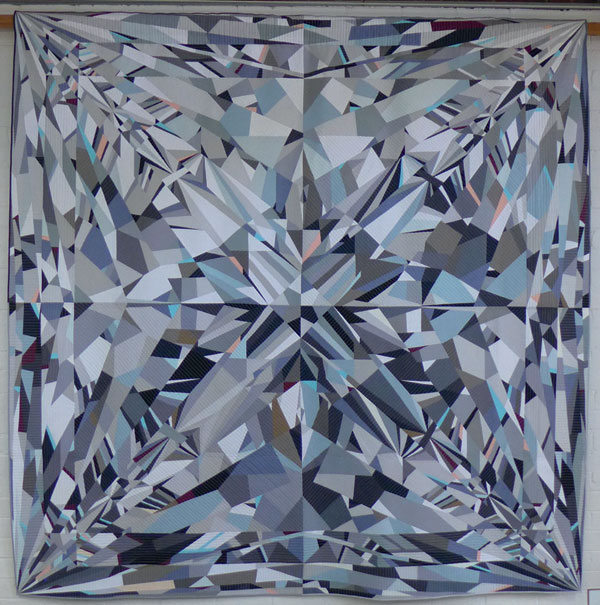 How To Quilting Special Feature

How did she do that? Kat Jones on her bling quilt

How did you come up with the idea for the quilt, and what did you want to achieve?

I entered the QuiltCon 2016 triangle challenge in 2015 and we were given a tiny triangle template which we had to use to make a quilt. After trying out a number of different ideas, I ended up reverting to my stash of grey solid scraps and created the quilt Facets, inspired by an emerald-cut diamond. While sewing all these tiny triangles of fabric together I kept thinking, this would be a lot easier to do if it was foundation paper piecing and wasn’t restricted to using this particular triangle shape. I decided then that for the following year I would make a large, foundation paper pieced diamond quilt.

You are well known for your modern bias method and organic shapes. What prompted this geometrical design?

I have always had a love/hate relationship with foundation paper piecing and one of the first large quilts I made was a Mariner’s Star Compass quilt, so it’s a technique I am familiar with. Although I am known for my organic improve appliqué work with bias binding, I do also enjoy making a pieced quilt and my aim with Bling was to get the idea of the light shining through a classic cut gemstone which, of course, leads to a lot of geometric shapes. 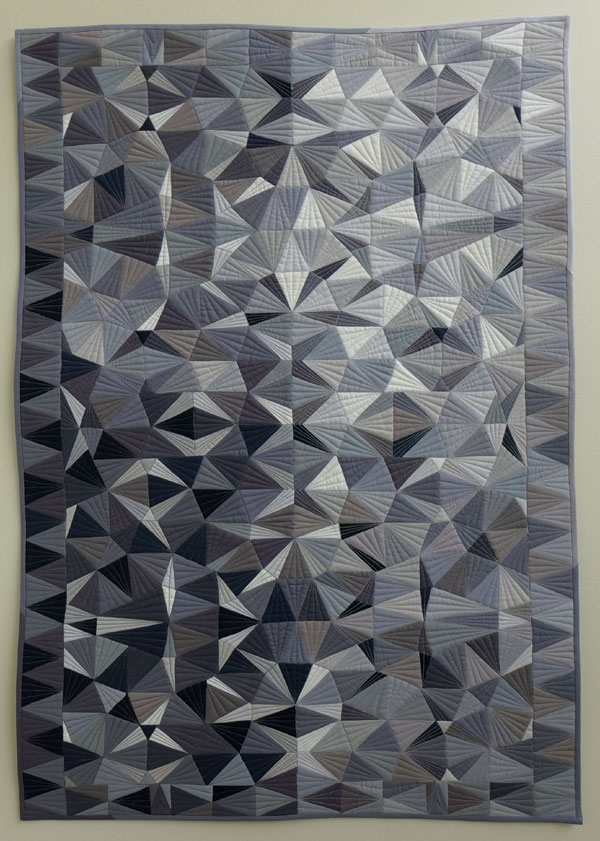 How did your design process work? How did you get from the idea to the pattern?

When I began designing Bling, I first looked at a lot of diamond photos online (there are a lot of online diamond sellers out there) and thought about what cut of diamond I wanted to portray with my quilt. As a princess-cut diamond is square, I decided this would be a good shape to work with for a queen-size bed quilt. Many of the diamond sellers’ sites have diagrams of the underlying structure of the different cuts of diamond, so referring to those diagrams, I drew up the main lines of one quarter in a program called Turbo CAD (a computer drafting program). Then looking at lots of photos of real princess-cut diamonds, I drew in lots of smaller divisions to create the idea of the facets and the sparkle. Then by copying and flipping this line drawing three times, I created the full ‘pattern’ for the foundation paper piecing. Having drawn it up on the computer full size, I broke it down into sections so I could have it printed out on A0 paper at my local photocopy shop. It was six sheets for each quarter, so a total of 24 sheets of A0 paper. 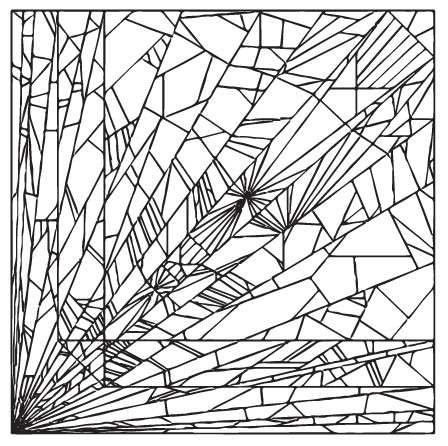 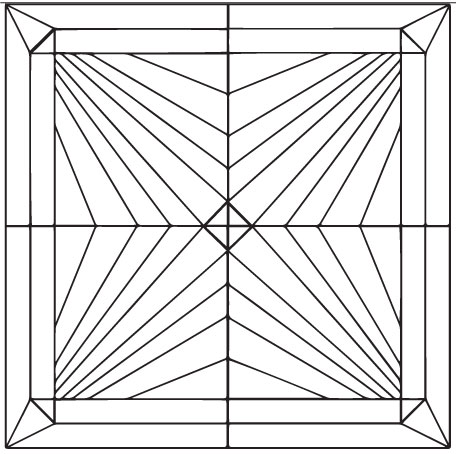 How is the quilt constructed?

Which fabric ranges and/or colours did you use? How did you put the fabric ‘to work’ to achieve the look you wanted to achieve?

I was trying to achieve the effect of light coming through the diamond, so I decided that each quarter should have a different tone: very light, mid light, mid dark and very dark. I had a large stash of grey solid fabrics from various manufacturers but they were mostly Kona Solids. I also purchased some additional grey fabrics from the Kona Solids range to ensure I had as many shades of grey as possible. While piecing each part, I considered what fabrics were next to each other, what tone that quarter was meant to be and what other colours apart from grey were visible in a diamond. I kept looking at my diamond ring to see colours in it and I think now that the apricot colours came from my skin and the blue colours from the sky. I think adding those small amounts of colour in this predominantly grey quilt made it more interesting and realistic.

Indulge yourself in luxury with the Dream a Little Dream Robe And Slippers dressing gown and slipper set pattern by Cheryl Goss.

Were there any major learning curves along the way that pushed your boundaries (and your patience)?

After piecing the first quarter, which took 40 hours, I could see that my idea was going to work and after that it was a bit boring to piece the other three quarters. Foundation paper piecing is very time-consuming and I had to push myself to finish the quilt top. Also the number of seams that converge at the corners of the quilt was a big design flaw. Although it achieved the visual effect I was after, anyone who makes quilts will know how bulky those corners are with all those seam allowances. I actually had to hammer those corners flat in order to get the binding on the quilt, and this is one of the reasons why I do not want to make a commercially available pattern for the quilt.

How did you feel when you learned your quilt had been awarded Best in Show at QuiltCon 2017?

Surprised. I am always surprised when my quilt is chosen for a prize as I usually think the other quilts I see in a show are so much better than mine.

Kat Jones is a professional longarm quilter and teacher living in Hobart, Australia. You can contact her by email: twocatsquilts@gmail.com

Kat will be teaching at this year’s Australian Machine Quilting Festival (AMQF) in Adelaide, 19th-23rd September. Her classes will include Modern Bias Techniques and Trapunto Balloon Mini. To find out more about AMQF visit www.amqf.com.au

Tags: how did she do that kat jones pattern Quilting
0 shares

In the Studio with Victoria Findlay Wolfe