Metropolises around the world are being embellished with ethereal lace sculptures that float above canals, appear to grow out of boardwalks and act as open-air theatres. In sharp contrast to the weighty structures and subdued tones of the cityscapes that act as their backdrops, these breezy, romantic artworks delight and surprise. 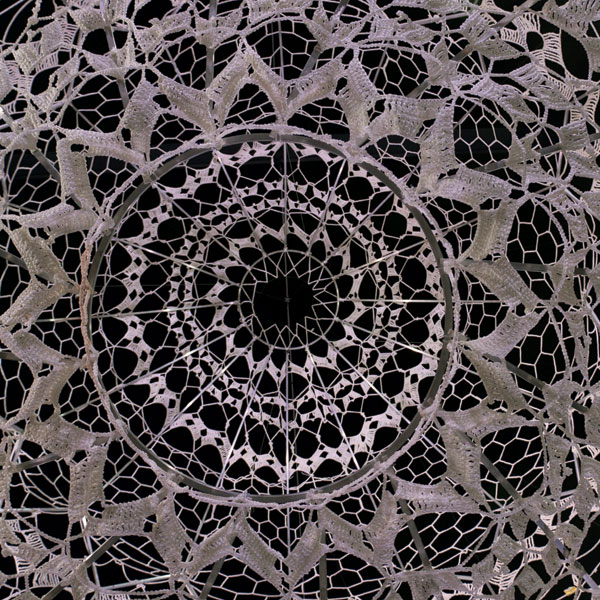 It’s the juxtaposition of bricks, mortar and concrete and the pure filigree daintiness that captures you when you look at these urban lace sculptures. The puzzling thing is that, for all their lightness and gentility, they are the elements that capture your attention, not the streetscapes around them – and when you’re talking urban wonders, such as Amsterdam and Singapore, they’ve got a lot of visual competition.

Some rise like see-through mosques, complete with lacy minarets. Some hang above rivers and canals like refined fishing nets suspended and waiting to be dipped into the water. Some look like onion-shaped alien visitors newly planted on the shoreline.

From a distance, the effect is light, feminine,  ethereal. So it’s a surprise when you get up close to the giant tatting to see the pure weight and scale of each installation. No more impression of delicate doilies – each fixture is thick and hefty and a challenge to lift into position. All of which makes the artworks that much more impressive 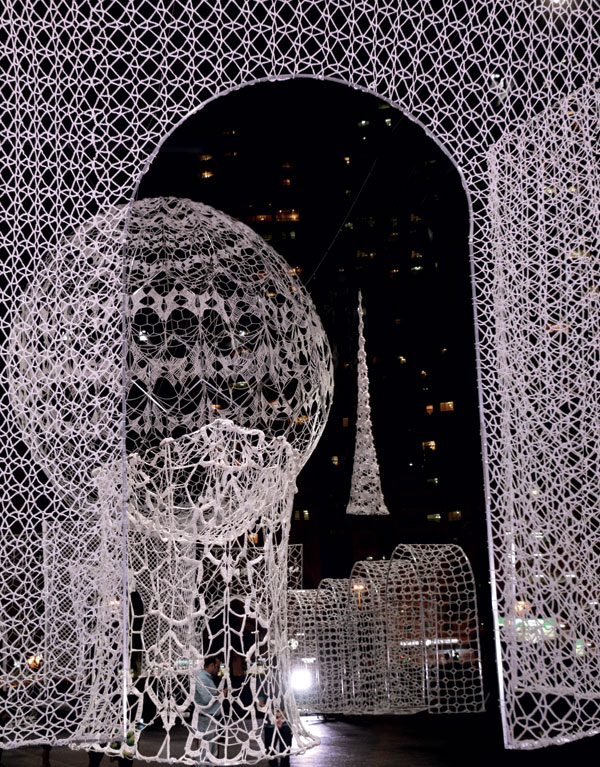 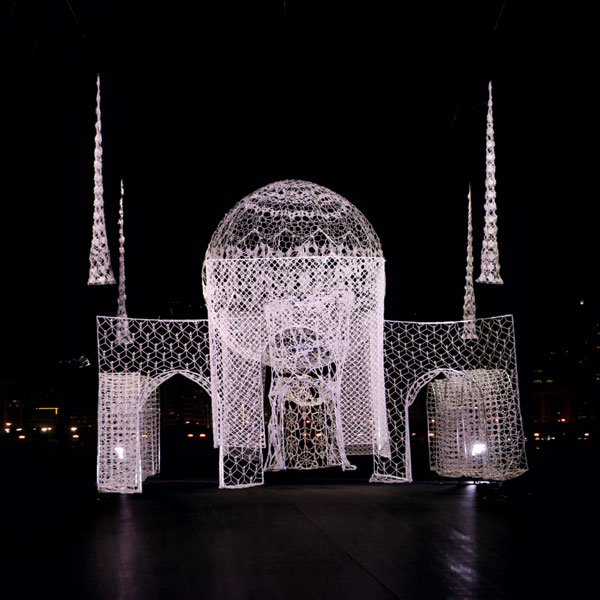 Jin Choi and Thomas Shine, from Choi+Shine Architects, are in the business of adorning cities with the unexpected. Their crocheted lace projects are large-scale, alfresco, levitating and three-dimensional – giving traditional crochet a massive modern makeover.

Choi+Shine Architects has created numerous lace installations, including the ones we are showing you here – The Lace, which was installed over a canal in Amsterdam (2016); The Urchins , taking up residence along a boardwalk in Marina Bay, Singapore (2017); and The Flying Mosque, an open-air theatre in the United Arab Emirates (2017/2018).

Jin Choi is one of the creators of these projects. “I had always been intrigued by lace in its intricacy, femininity, transparency and association with milestones of our life and nostalgia,” she says. “The making of lace also intrigues me; how a single thread could be transformed into first a surface and then into a three-dimensional form, merely by twisting and joining to itself in a repeated pattern.” Jin is also fascinated by large-scale tensile structures, such as tent-like canopies and enclosures, in particular how they interact with light. “I thought it would be even more interesting if the membrane could be perforated as in lace, casting dappled shadows and framed views.” 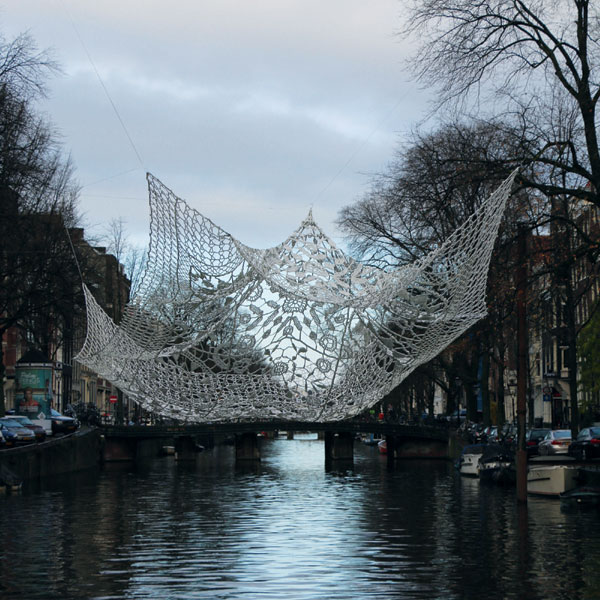 To materialise this vision, Jin studied different lace-making methods that would work best for a large-scale structure, ultimately deciding that crochet would be the most effective method, as it allows for working with a continuous yarn for a durable construction.

Surprisingly, she taught herself the whole crochet procedure simply by following instructions on YouTube and in books, so she could have a hands-on role in the urban projects. But it’s no mean feat translating those small-scale crochets into the vision of urban installation. Taking the concept of crochet to streetscape sculpture requires an understanding of engineering along with an eye for aesthetics. The chosen cord has to be workable and able to withstand climate variation. It also has to be safe.  Jin, along with many other crocheters, stitch the patterns using UV resistant and flame-retardant cord.

“Even though the cord is relatively thin, when it is crocheted it gains a lot of strength from the repeated loops,” she says. Large-scale crocheting combined with tight deadlines, makes these projects extra challenging. As the lace grows, the work becomes too large and heavy for desks and tables, so much of crocheting takes place on the floor with Jin and her colleagues crouching for hours on end. 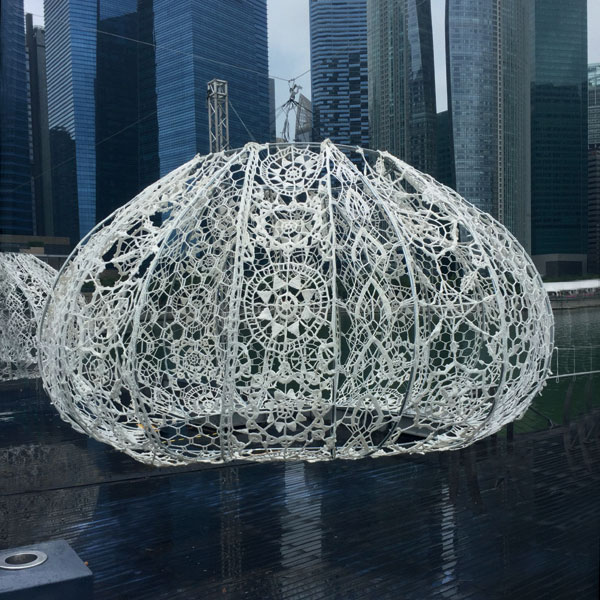 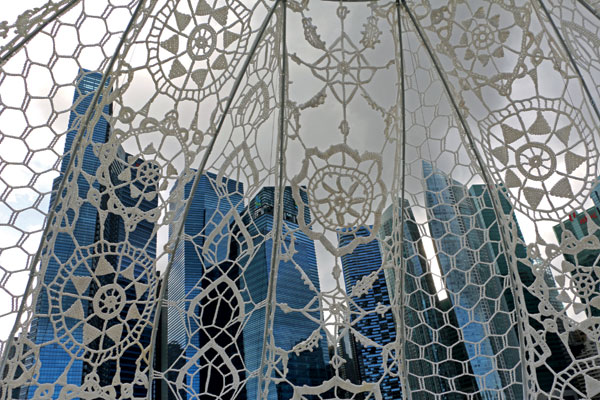 Despite the almost back-breaking work, the team has managed to churn out a number of finished pieces. “If we had many months to work on one project, I probably could have avoided many of the injuries to my wrist and shoulder joints!” says Jin.

The installations may look delicate, but they are robust enough to withstand the elements. The supporting structure is designed long before the crocheting begins. For the majority of the lace projects, metal frames and three-dimensional printed parts are used to support the crocheted lace, which is then suspended with cables and fastened to trusses. “Because of the required durability of the materials, the works are very heavy, but we put a lot of effort into creating the illusion of lightweight, lacy, levitating forms,” says Jin.

When choosing a location for a lace sculpture, many factors need to be considered, including accessibility and vantage points. “Natural elements, such as wind, rain and the orientation of the sun, as well as light or noise from the neighborhood affect our decisions about each the installation as well,” says Jin. “For instance, we used the water surface to maximise the reflection in Amsterdam’s canal [for The Lace project] and worked with the reflectivity of the boardwalk as it gets wet from the frequent rain in Singapore [The Urchins project].” 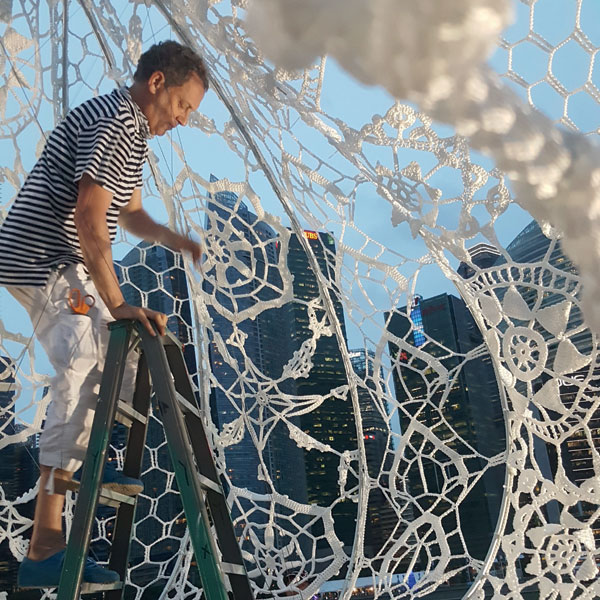 Australia was lucky enough to have a Choi+Shine lace project in Surfers Paradise this year. It was especially made to celebrate the Gold Coast 2018 Commonwealth Games, in April. The Urchins in Australia was crocheted by more than a hundred Australian volunteers using new patterns designed by Jin. The patterns were inspired by the Queensland environment and featured flying foxes, Nerite seashells and indigenous lace monitor lizards.

Choi+Shine’s enchanting sculptures encourage us to find a moment’s peace in our urban environment and to look for beauty in unexpected places. “When lace, which is often intimate and human-body scaled, is enlarged and misplaced in a public space, it creates a sense of wonder and makes us pause. This pause hopefully allows us to look around our familiar space in a new light, finding poetry around us.”

Forget rose-coloured glasses; viewing a city through a lacy filter has has massive and magical rewards.

To find out more, visit choishine.com.

Getting Cosy with Designers – Cori Blunt and Lynette Anderson