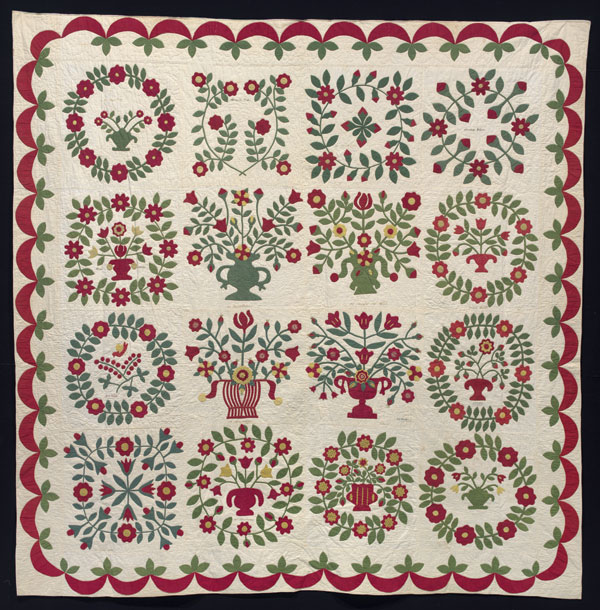 Stories in the Seams – The Ruth Penn Baltimore Album Quilt

Quilts have often been made and given as gifts to commemorate big life events. Ruth Pettit Penn followed a local fashionable trend when she made this quilt for her son’s marriage.

In the late 1840s, an existing fad for young ladies to collect poems, drawings and autographs of friends in a book or album was translated into fabric versions, or album quilts. The paper pages became quilt blocks, often signed with names of friends and family members of the maker. A distinctive style with blocks covered with elaborate appliqués of leafy wreaths, woven baskets and vases of multilayer fabric flowers, arranged in grid formation, with or without sashing, developed in Baltimore, Maryland, a port on the eastern seaboard. They are now known as Baltimore Album quilts and are some of the most decorative of the album quilt genre.

Many extant quilts by different quilt makers boast identical designs with identical fabrics. Additionally, quite a few unfinished quilt blocks survive, with the pieces basted in place on the backing fabric. This leads quilt historians to believe that designs were distributed as precut and basted “kits” ready for the individual quilter to stitch. Few entire quilts are identical: a wide variety of designs were available, with the artistry of different pattern designers evident. Many Baltimore Albums contain a combination of blocks seen frequently in multiple quilts (those believed to have been commercially available) and unique blocks designed by the individual quilt maker. 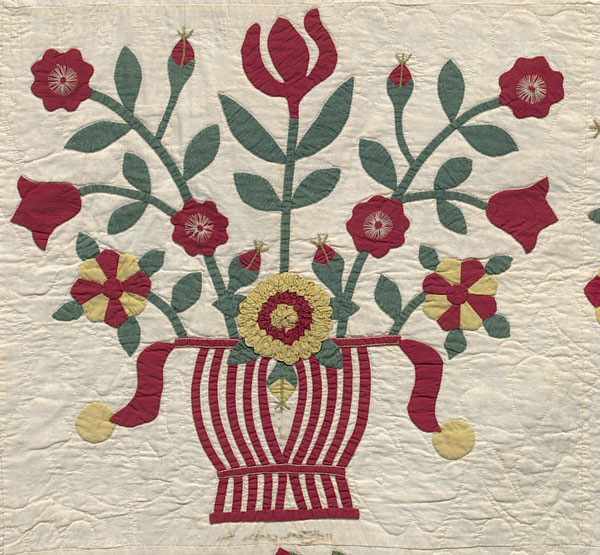 One of the four central baskets, this one features the only ruching on the quilt. Note the holes in the fabric below the basket, where the signature has eaten through the fabric. 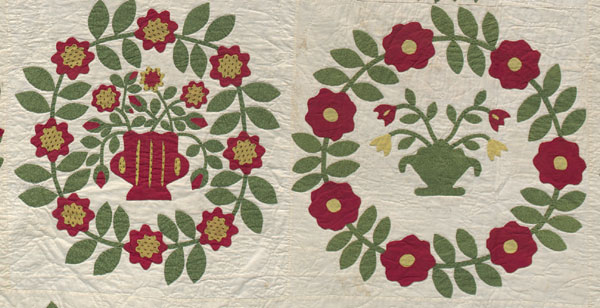 Two wreaths that sit side by side in the quilt, one of which shows the non-circular nature of the wreath. The lack of a perfect circle need not diminish from the appeal of the quilt.

Recent improvements in the technology of dyeing fabric had produced red and green dyes that were more stable than previously available, and a decades-long fad for red and green quilts ensued. Baltimore albums usually fall within this palette. Reverse appliqué (also called inlaid appliqué) was often used to enhance simple shapes with brightly contrasting colours.

The formality of the patterns in the blocks in Ruth Penn’s quilt, and the well-planned arrangement, show the work of a skilled artist. The centre is anchored with four elaborate vases containing perfectly balanced floral arrangements. These vases are surrounded with floral wreaths, with different elements inside the wreaths and different configurations of leaves and flowers. No two blocks are exactly alike. Look carefully at the wreaths in the upper left and lower right of the picture. Although the blocks are very similar, the vases in the centre of the wreaths have different flowers.

The stitching, however, exhibits a labour of love rather than expert execution. Although Ruth was obviously a skilled seamstress, her wreaths wobble a little off from the perfectly circular. The swag border does not quite fit around the corners as well as she might have wanted. Some of the centre elements are not quite in the centre and seem to be about to burst free from the surrounding wreaths. 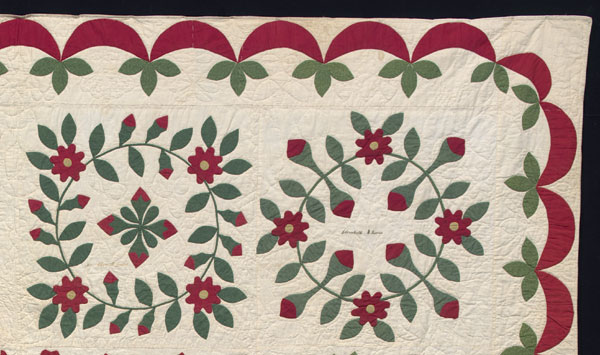 This close-up shows the top-right corner of the quilt. The signature of Elizabeth Jones is showing both blocks. But check out the background of this section of the quilt: it shows the quirky and random nature of the quilting, which has been completed at 10 stitches per inch.

Ruth Penn’s personality really makes itself known in the quilting; motifs vary drastically across the quilt and rows of overlapping clam shells were begun and abandoned in several unconnected areas. Random shapes vaguely identifiable as leaves and flowers meander in complete disorder. A small child’s hand is outlined.

Her most conspicuous contribution is in her signature. Near the centre of the quilt are the quilted letters “SAMOHT ROFPRBQ”, followed on line below by “P PENN”. We believe these are meant to be read as “Q[uilted] B[y] R[uth] P[enn] For Thomas P Penn”. It seems to be stitched from the front of the quilt in the normal way. Why she chose to stitch part of it backwards remains a mystery.

The signatures written on the quilt in ink tell of the involvement of friends and family, but are also a cautionary tale to the modern quilter. Some names are still legible; others, written in inferior inks, have bled, blurred and even burned holes in the fabric, making them illegible. The signer’s relationships to the Penns have also mostly been lost.

The overall beauty of the quilt has ensured it continues to be appreciated and cherished. In 1927 it was displayed in a Baltimore department store for public admiration. It came to the DAR in 1992 from descendants of Thomas and his second wife, and has been enjoyed by visitors whenever on display. More information about this quilt and the other Baltimore Album quilts in the DAR collection can be viewed on the Quilt Index: www.quiltindex.org