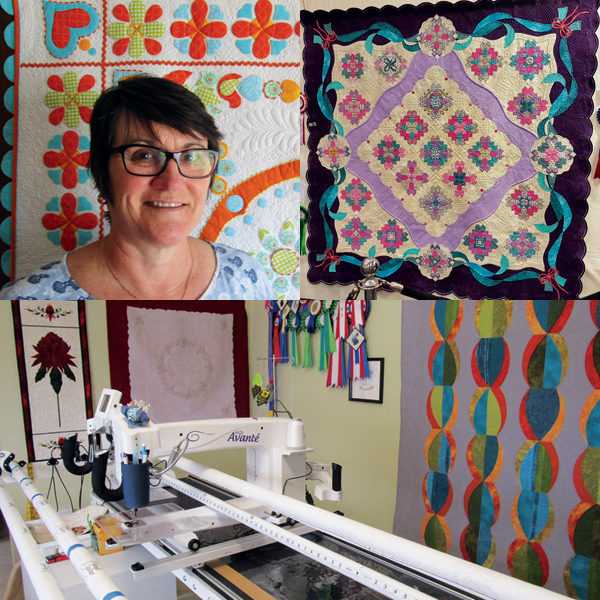 In the Studio with Tracey Bareli

A converted lounge room is the perfect haven for Tracey Bareli to indulge her passion and take time out to relax and unwind. “Through work and life stresses, my machine has helped me keep my sanity,” she explains. “I can go into my room and just get away from the world”

As her interest in quilting grew, Tracey Bareli decided she needed a designated sewing space, so she got rid of all the furniture in her formal lounge and moved her supplies in. “I have a huge window looking out onto the street, which is great for light, and I can watch what’s going on in the neighbourhood while I sew,” Tracey explains. Her long-arm quilting machine takes up the bulk of the space, leaving a small but comfortable area to get creative.

While her machine now takes pride of place in her sewing space, Tracey didn’t even know what a long-arm quilting machine was when she bought it. “I had used a domestic sewing machine to do my quilting, then I saw the long-arm while at a friend’s place and knew I had to have one,” she recalls. After saving up for months, Tracey bought the machine without even considering the space it needed. “When it arrived, my husband asked if it would fit in my room and I really didn’t know, but luckily it did. We set it up and then I thought, what do I do now?”

Having taught herself the basics of quilting on a domestic machine, Tracey had a base knowledge of technical quilting requirements, but there was a lot to learn about her new toy. “I live eight hours from the city, so it’s not as easy as dropping in to a store for a class or to ask a question,” says Tracey. But with a bit of determination, and YouTube, she soon got the hang of things and is now creating amazingly intricate designs. 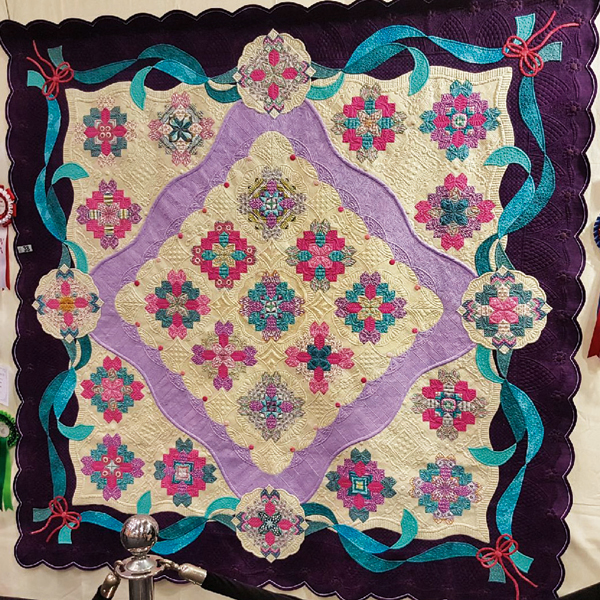 The walls of Tracey’s studio showcase the quilts she has made over the years. “If I ever move to a new house, I’m going to have to buy a lot of putty to fill all the holes in the walls,” she says with a smile. Amidst all the hanging quilts, there is another treasured masterpiece adorning the walls. “I have one of my son’s artworks that he did at school, framed on the wall,” says Tracey. It’s black and green and features a wax technique to expose colour underneath. “I thought it was unusual and I liked the colours,” she says.

Tracey has won many awards through the years and her ribbons take pride of place in her studio. “My husband made up a board to hold all of my ribbons and awards, and he’s due to make another one,” she says. Among other achievements, Tracey was awarded Best in Show at the 2017 and 2018 Perth QuiltWest shows. Tracey’s award-winning quilts showcase her love of bright colours and standout quilting, giving her work a cheerful appeal that does go against the norm for some more traditional quilters. “I like bright colours — pinks, purples and oranges, particularly burnt oranges,” she says. “The quilt that won Best in Show in 2017 featured bright orange and teal. I had a lot of people ask why I chose the orange, but it was just because I liked it.”

While Tracey has what seems like a natural affinity for quilt construction, she did not always harbor a love of sewing. “I didn’t like sewing at school,” she reveals. “You had to make practical items, like skirts and clothes, and I was hopeless with the sewing machine.” Things have changed over the years though, with sewing now a big part of her everyday life. “I am always at my machine,” says Tracey. “I pop in between work and house work and other things to have a play.” 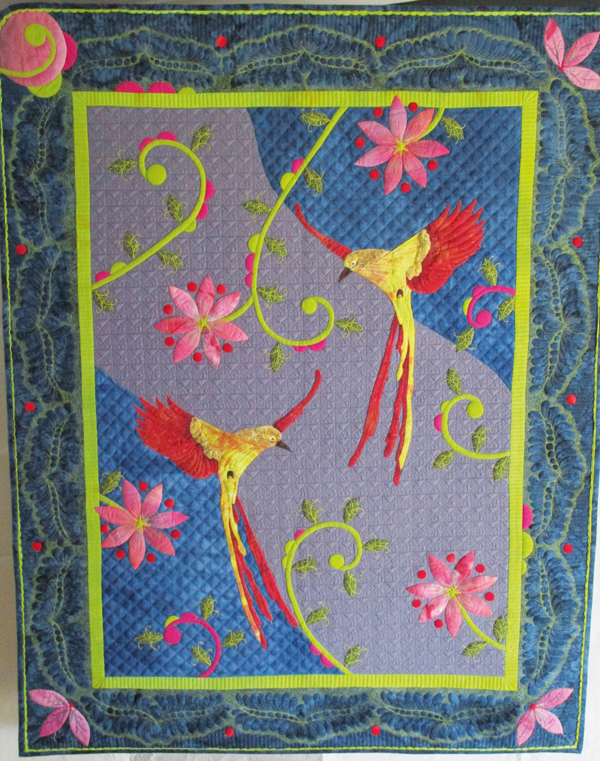 Unsure when her interest in sewing began, Tracey does remember the first quilt that she completed. “When my son was born 28 years ago, I made a hexagon quilt using the Grandmothers Garden pattern and bags of fabric from friends.” Once she got started, the quilt kept growing and growing until it was the size of an over-size single. Then she hand-quilted her project with very little technical knowledge. “I had no idea what I was doing, but it came together and it’s still going, so I did something right,” she says with a laugh. From those humble beginnings, Tracey now finds herself quilting amazingly intricate designs, trying new techniques all the time. “I am inspired by what the quilt tells me it needs,” says Tracey. “I currently have my machine pulled forward so that I can have a go at pantographs, which I have never done before”.

Tracey has also taken her love of quilting into the community, getting involved in sewing groups and raising money for charity. “There are quite a few long-arm quilters in Esperance (WA) with very little support nearby, so we will often get together for a day and help each other,” she says. Tracey has also donated quilts for auctions to raise money for the local RAFS, as well as creating for open-house days to raise money for breast cancer research.