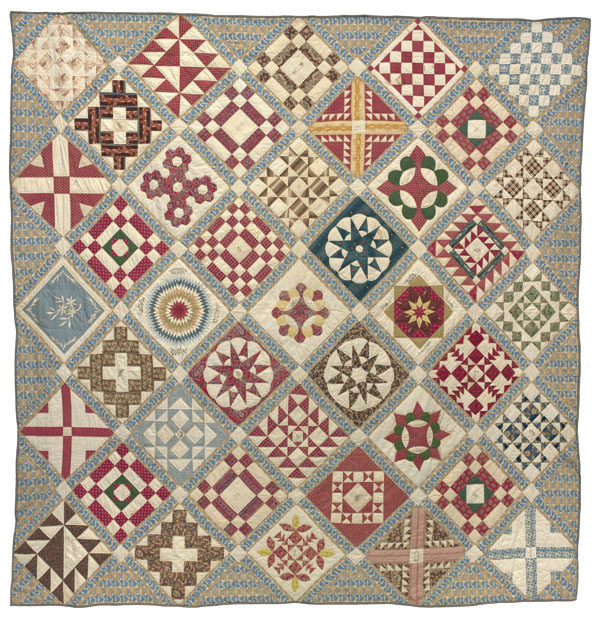 Album quilts could be defined as “fabric scrapbooking”. Blocks are created by and for family and friends with inscriptions and colourful designs. While they can be enjoyed simply for the visual impact of the arrangement of cloth and colour, relationships, circumstances and intentions are often hidden in plain sight in the signatures and messages added to the piecing and appliqué.

On the eastern seaboard of the United States, with easy access to the trade ports of New York City and Philadelphia as well as the textile mills of Pennsylvania, quilters in the state of New Jersey developed a style of album quilt to showcase the wide variety of fabrics available as well as their sewing skills.

A New Jersey album quilt is recognised by blocks placed on point separated by sashing (usually a print or striped fabric rather than a solid colour) with both pieced and appliqué block designs. Bright colours, (such as Turkey red and chrome yellow) dominate, unified by a light-coloured or white background. Many of the compositions (pieced or appliquéd) are circular in shape and this “round peg in a square hole” makes the negative space around the circle a vital design element. Sometimes the area around the design is left open to reveal the light background; sometimes the centre is framed with a coordinating or matching fabric to further concentrate the focus of the eye. Designs and fabrics may be repeated, but unique arrangements abound, creating a vibrant mix of hue and pattern.

The style was even embraced by the local members of the religious sect of the Society of Friends (also known as the Quakers). Although they were required to adopt “plain” dress and a conservative, devout demeanor as part of their religious practice, restrictions on personal expression were often more relaxed in their quilts. Brighter colours, print fabrics and complex designs difficult to execute were used despite the religious constraints in other areas of the Quaker lifestyle. The results, like this example, are often dazzling.

The centre block of this quilt is signed by Thomas Sykes (1764-1852) and the family history that came with the quilt from a descendant expressed that the quilt had been made for him. While many of the other names on the quilt include members of Thomas Sykes’ immediate and extended family, once genealogy research was begun on the signatures on all the blocks, a different possibility for why the quilt was made and for whom began to emerge.

While none of the inscriptions specifies a date, the fabrics identify that the quilt was made in the 1840s. Because Thomas’s daughter Ann Sykes (1810-1884) signs her maiden name, we can surmise she signed before her 1849 marriage to her cousin John Curtis (who also signed the quilt). Added confirmation that the quilt was made pre-1849 is provided by a block signed by another of Thomas’s daughters, Lydia Sykes, who died in 1849. Thomas’s son George (1802-1880) signed a block, but several other members of Thomas’s immediate family are noticeably missing. The lack of blocks signed by Thomas’s wife Mary Laurie (1771-1831) and daughter Beula (1804-1826) can be explained by their deaths prior to the time the quilt was made, but what about daughter Edith Sykes (1808-1888)?

Album quilts are often presented as gifts for special occasions, in particular for weddings. Unless it is in a commemorative inscription like “made for …” or “in honour of …”, the names on the quilt are usually those of well-wishers, not of the intended recipient.

Edith’s 1847 wedding to Earl Gibbs (1800-1854) seems a likely reason for her father, siblings, cousins and others to join together in creating an exuberant example of family ties expressed in needle, thread and ink. Hints of connections occur in duplicated block patterns. Many of the similar patterns are signed by immediate members of the several families represented. Not all the signatures are currently legible and some relationships remain to be unravelled, but what can be deciphered supports the idea that Edith’s and Earl’s union was what brought family, friends and fabric together.

Edith had only seven years of married life before her husband’s death left her a widow with two small children. After that she shared households with one or the other of her siblings, living out her life in the close-knit Quaker community that created this extraordinary quilt. The cherished heirloom passed down in the family until its inclusion in the DAR museum collection. 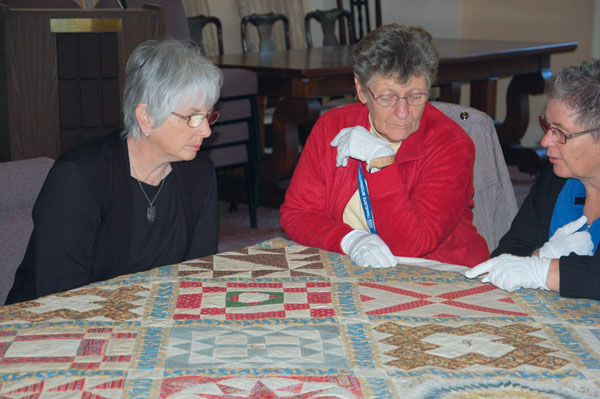 In 2012 the participants in the Travelrite/Quilters Companion tour were able to see this stunning quilt as part of the Daughters of the American Revolution Museum tour.

Learn how to modernise traditional quilt blocks with Leanne Harvey 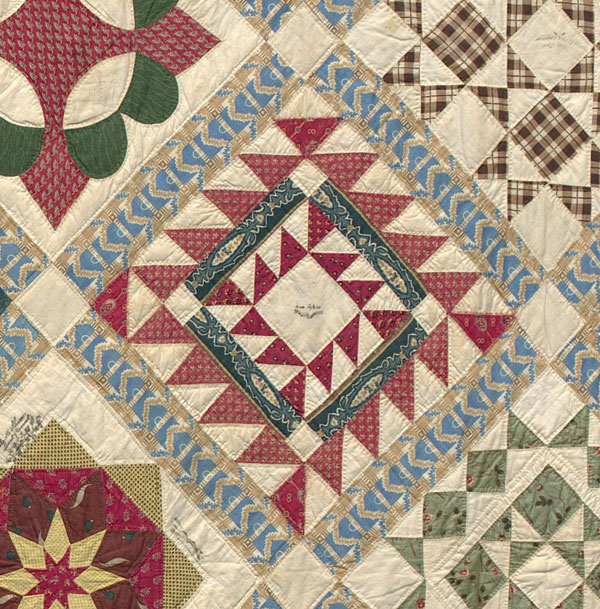 Narrowing the date of the quilt can be done by using the inscribed names. Thomas’s daughter Anne has signed this block with her maiden name. She married in 1849.

Getting Cosy with Designers – Sarah Fielke and Michelle Ridgway